Poll ended 6 months ago with 35 votes.

Site Moderator
Freckle Inspector
Who would win?
Posted about a year ago Report
Link Quote Reply

الصداقة حرام
Earth ponies should win because i feel sorry for them being the worst race without any special powers.
Posted about a year ago Report
Link Quote Reply

zebras are alright tho, honorary earth ponies and they do alchemy/potions
Posted about a year ago Report
Link Quote Reply

PeaDot
Earth Pony Volk are in tune with nature, their cause is the most Righteous.
Posted about a year ago Report
Link Quote Reply

Earth Ponies have a lot going for them, but their toolset is limited.
Pegasi fly, but that seems to be all we can expect from them individually. Cloud bases are probably really helpful for logistics.
Alicorns are just too rare to make a significant difference.

Unicorns have magic. Many different spells. This has huge potential, but it's really not explored often. I think that, if this potential could get explored a bit, then the Unicorns would ultimately win. 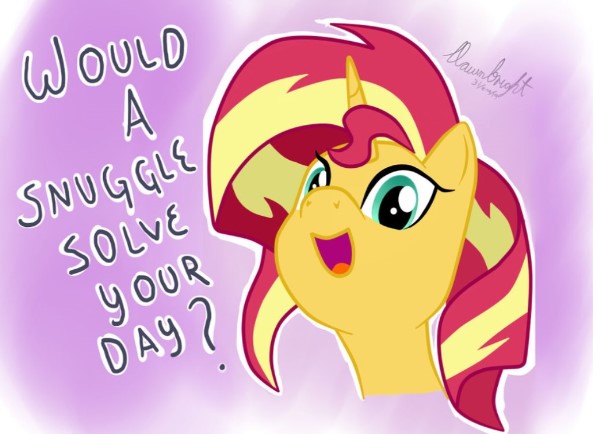 Havock
Half Dragon, Half Meme
Draonies are clearly the best.
Posted about a year ago Report
Link Quote Reply
Background Pony #B7D2
All residents of Equestria are clearly insane. TLDR [s]They all win, depending on circumstances.[/s]
Unihorns have violent lasor blasts with magic spewing everywhere. On the other hand they have lasers, and time travel, and teleportation, and weird spells that just work.
Pegisussikussus are wingy, and while they do weather stuff growing things is not a forte. Raiders, pirates, and vagabonds, maybe a military but at the current tech level the playing field is more equal. They loose the flight advantage. I mean weather power is destructive.
Earth pone they stronk, have apples, can use tech, the backbone of society. The Earth pony culture is the least likely to implode, thus indoctrination and turning the young (random pony babies from Earth pony parents, inti their own).
Chungus horny wing ponies… individually kinda okay for a direct confrontation. While they could do a scorched earth policy they can't keep it up forever. Also has all the stuffs. Considering that all alicorns so far are female, they need to get the seed to breed (assuming they can). Basically spawn as many uber pones as possible. Unlikely to win vs everyone else. Unless there is friendship and magic or some bs like that.
The grabbag of horrors, and Spike. It all comes down to numbers and how good ensuring saftey. The monsters and huge animals are tough and dumb to an extent. Dorguns can fly, breath fire, are immune to lava, and can grow immensely. They just don't care units they can get something. Griffs they have… uhh… talons, and wings. Both don't friendship good. ZI- I mean Zebras' are rare in Equestria, potions for every occasion. Buffalo does what a buffalow wants. Windegos, race war means good eats nom nom freeze them all. The various side characters could pose a problem. Discord wins this engagement before becoming bored. Changlings can zerg rush. Hippyfaggot Changlings create energy ex nilo by sharing it with each other. Put them into a giant hamster wheel and watch the infinite power in motion. Mirror Magic, temporary means of everhthing has gone to shit. Excaping the mirror is easier than craming eveeyone important inside.

Site Moderator
Freckle Inspector
ok what about the breezies tho?

𝚽σ𝜏mares
Do zebras count as a subset of earth ponies or are they merely a coat pattern that can be of any race?
Posted 12 months ago Report
Link Quote Reply

Site Moderator
Freckle Inspector
@𝚽σ𝜏mares
there aren't pegasus zebras or unicorn zebras. they're a different race
Posted 12 months ago Report
Link Quote Reply
Megalith
Site Moderator
It is a tough call. The Pegasi do have some tactical advantages, namely that they can alter weather and have a relatively safe haven from counter attacks. I don't think they have the staying power that they once did when they were based on more of a war class structure. Still, aerial combat can be a devastating advantage needed to secure vital resources or conduct quick and effective guerilla warfare.

Unicorns would be a logical step for most people, however, most unicorns have a very limited range of magic they can conduct. Their war readiness would be in worse shape unless they tap into the wealth of the unicorn elite in Canterlot for example. Even then, only a third of their specialized work force is available now, a decent chunk of the missing labor field being construction, weapon smiths, and food production. The could retrain themselves to take over these industries, but that would take time that might not be there in a war.

Alicorns can't really be considered. It has not been made clear at all how they reproduce in the show, so even with lifespan at least in the thousands, they can't maintain everything themselves, so if they do pull a win with enhanced power, then they won't exactly have much to live with in the aftermath. The only way around this is if they enslave the defeated races instead of genocide, in which case, they would have to form a police state to avoid a massive unified effort against them.

The other shown races in the show are not much of a threat. The yaks smash things, but especially pegasi can halt their advance and lay siege to any territory they take. Buffalo had a stand still for a bit in Appleoosa, but they don't have the numbers to continue on any long term conflict. Zebra have not been explored enough to say, but clearly they are not great in number in Equestria. Dragons are a bit of a threat, but any mix of bribery and intelligence can see a victory over them. Griffons would likely profit over the war rather than participate. Hippogriffs have a navy and can transform into both aerial and amphibious creatures, but they are outclassed in any attempt to invade Equestria proper. Their only hope is that the race war happens to near completion and then they strike the survivor. Changelings would be cause for concern if this was before the events of the season 6 finale, but as we see after that event, they have resigned to anti-conflict mentality. They would be fighting an uphill battle with with powerful transformations and disguises with their experience on the battlefield basically deprogrammed. Kirin are full isolationists and I don't think they would even be aware that a race war started unless it was brought down on their home. Not enough is know about their unicorn like magic and if that is powerful enough to rival unicorns, but their fire transformation into niriks is the main draw of their combat potential. Only problem is that they are prone to infighting, making coordinated attacks harder, especially against the rest of the races that have actual armies.

Earth ponies are my personal bet on this conflict. They would likely struggle against each opponent they face, but they also have specialized ponies in just about every field that is needed to make society work, as well as enhanced strength in several members of their race, a magical connection with nature to secure food, and they hold the biggest connection to their ancestors' way of life, meaning they have the pioneer and fighting spirit the rest of the races have slowly abandoned. Bringing the fight to their turn is more of a challenge as they are not only in towns and cities, but they have spread across the entirety of Equestria. They can easily regroup at any number of locations and would have homefield advantages just about in every circumstance, the main weaknesses being pegasi and dragon aerial attacks, which are harder to counter with their current technology level. To crush the earth pony spirit, you will have to take every inch of Equestria soil. If they pull a win, their society would be most fit to rebuild and prosper again.

That's why you depend on them.